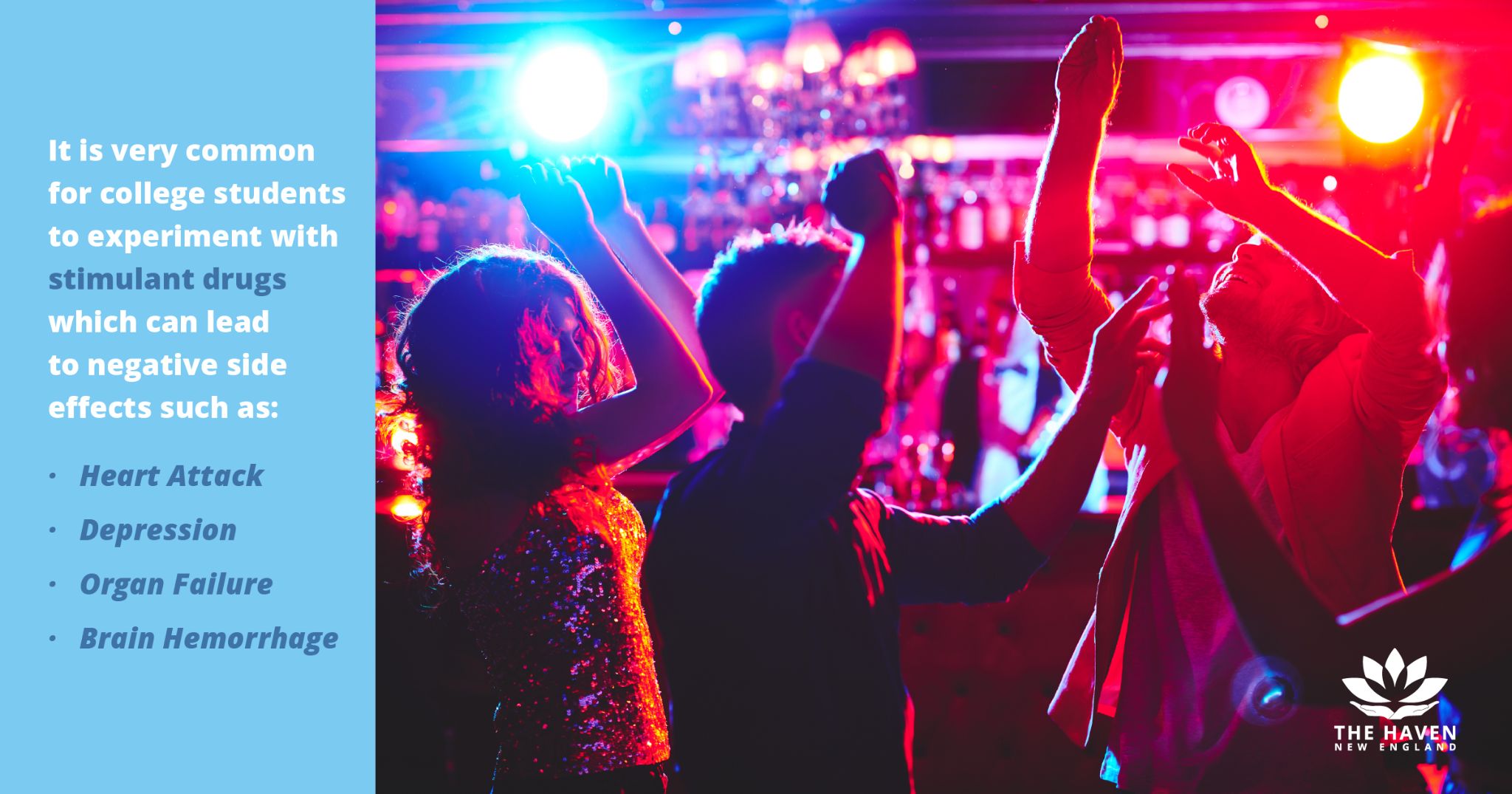 Although drugs cuts across people of different age groups and statuses, it is most common amongst teenagers and young adults. There is a lot of abuse of opioids, cocaine, heroin, and many more. There is naturally this impulsion to start and try out things you never have when you finally get into college. Many college freshmen get into this euphoria of doing new things because of the “freedom” they are suddenly exposed to because of the lack of parental guidance.

There is the influence of groups and peer pressure in general in colleges. To properly get the context of our discussion, you should understand that the age of individuals in college is roughly between the late teens and early to mid-twenties depending on the length of the course of study.

What are Stimulant Drugs?

These are drugs can make you feel “high” or euphoric and are commonly described as being on “cloud nine.” This explains why they are also commonly referred to as “upper.” Stimulants make you alert and can give the user unexplainable energy.

Stimulant drugs release dopamine in the body, resulting in heightened focus and enhancing mental and physical functions for the short period that the drugs last in the body. They speed up the central nervous system’s functions, which, in turn, causes increased brain function.

These stimulant drugs usually come in the form of capsules or tablets. However, to get a faster effect of the drug or to increase the potency of the drug, many college-age adults crush the tablets or capsules and inject them directly into their system. Some even go as far as sniffing and inhaling stimulant drugs. Medical experts sometimes prescribe stimulants for the treatment of specific medical issues. One prominent example is attention deficit hyperactivity disorder (ADHD).

The Side Effects Stimulant Drugs Have On College-age Adults

Stimulants, as mentioned earlier, heighten the brain and body functions of the individual using them. It does this by releasing dopamine into the body’s system. However, all these great feelings given by the drug are always just for a short period.

Stimulant drugs increase the level of dopamine and norepinephrine, both of which are chemicals of the brain. Norepinephrine naturally affects the blood vessels, breathing, blood pressure, and heart rate. Taking a stimulant drug means an increase in these brain chemicals, which would automatically mean rapid growth in the function of the body systems that they control or are in sync with. It has been scientifically proven that the continuous use of stimulants makes the heart age quickly.

Generally, stimulants use the brain neurotransmitters, which are chemical messengers in the brain, to make the nervous system, which is the body’s control system, come “alive.” However, it causes an imbalance of neurotransmitters. Using stimulant drugs causes your brain to overproduce dopamine and norepinephrine. Stimulant drugs can also cause a reduction in the grey matter of the prefrontal cortex of the brain.

There are many other side effects that the use of stimulant drugs can cause. We have only highlighted and explained a few of them.

There are many stimulant drugs used by people of different age groups and statuses. But some are very popular and common amongst college-age adults. The most popular stimulants used by this category of individuals are:

Adderall is the most popular of all the stimulants used by college-age adults. Adderall is a prescription drug used to treat conditions like Attention Deficit Hyperactive Disorder (ADHD) and narcolepsy. The effect the drug has when you take more than the prescribed quantity is, it produces a large amount of energy in your body.

The few hours that the stimulant lasts in your body make you very focused and full of energy. Adderall usually comes in tablets and capsules. This drug is the most abused stimulant drug because it helps college-age adults contrate while they study for their tests and exams.

The drug gives the effect of pleasure and feelings of energy. The drug usually comes in a tablet or capsule form. Some people, however, consume it in liquid or powder form. It helps to increase three main chemicals in the brain, which are Dopamine, Serotonin, and Norepinephrine.

Dopamine increases the energy level in the individual. Serotonin controls your mood, sleep, appetite, and many more body functions. Norepinephrine, on the other hand, helps to control your blood pressure and heart rate. The effects of the drug usually last for three to six hours. It is commonly referred to as a recreational drug.

It is usually vaporized in a glass pipe, and it is also injected into the body system sometimes. The use of the drug helps to build a high level of confidence and gives you so much energy. The effect of using crack cocaine is far more potent than just cocaine itself. This is the most dangerous stimulant drug because of its side effects and how easy it is to overdose on crack cocaine.

According to The United Nations Office On Drugs And Crime, over 35 million people struggle with drug abuse. Of these large amounts of people abusing drugs, the UNODC states that college-age adults take the greater share; they are also the most affected by the side effects of these stimulant drugs because they consume them in large quantities.

Another report states that in 2018, about 2.2 million young adults between the ages of 18 and 25 abused prescription stimulants. There are a lot of reports and publications that also report that college-age adults take a higher percentage of the total number of people that use these drugs across different age groups.

What Are The Reasons Why College-Age Adults Consume Stimulant Drugs?

There are different reasons why college-age adults make use of stimulant drugs. The reasons range from peer pressure to the strong desire to pass a test or an exam to ingesting it just for fun and recreation. Some even use it for a temporary boost of confidence. We will be highlighting and discussing some of these reasons below.

One common reason why most college-age adults consume stimulant drugs is so that they can be able to focus on their studies. The drugs help to keep them alert, awake and focused. Because dopamine is released and there is an increase in brain function at that time, they can assimilate more than they normally can while under the influence of the drugs.

What are the Measures that have been put in place by the Government to Reduce and Prevent the Wrong Use of these Drugs by College-Age Adults?

What the government of most countries have done to reduce and prevent the use of stimulant drugs is to enact Laws and Policies against it, making it a crime to do use such drugs. That’s why sometimes, you Law enforcement agencies crashing into a college party and arresting those under the influence of stimulant drugs.

What Are The Steps You Can Take To Help College-Age Adults That Have Become Addicted To Stimulant Drugs?

There are different treatment plans available for individuals who have become addicted to stimulant drugs. These treatments aim to ensure that the college-age adult stops using the drugs; that such an individual is finally drug-free. After going through all the stages of withdrawal symptoms, he can function properly in society. Some of the steps to take are;

From the answers he gives to your questions, you would be able to determine what treatment method he would have to go through. You cannot use the same treatment methods to treat everyone who is struggling with an addiction to drugs.

For tobacco products, for instance, there are drugs available to help an individual withdraw entirely from its use by making provision for “replacements.” Some of these replacements include gums, spray, lozenges, and many more. Drugs like Bupropion and varenicline are approved for use to combat tobacco addiction.

Counseling and Individual therapies. The adult has to acknowledge and know that there is a problem with him, and he wants a solution to that problem. Therapy can help them find out why they started using drugs like Adderall or cocaine.

During the sessions, they talk about their journeys through drug addiction, their current treatment plan, and their end goal. It serves as a form of accountability.

The use of stimulant drugs is really on the highrise among college-age adults. There is a lot of sensitization going on to help stop this trend from spreading amongst college students.

Let’s get you or a loved one help with a few simple steps.